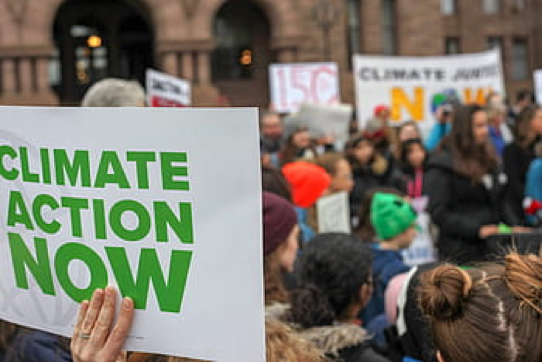 Likely to witness the environmental impacts of a changing climate within their lifetimes, young people have approached the issue of climate change with a certain urgency. Young adults are some of the most prominent supporters of the Green New Deal and have proven to be vigorous advocates for climate legislation and action. Recently, many youth organizations have gained national attention. Here are just a few:

With the understanding that youth are often ignored in discussions of climate change, the founders of Zero Hour wanted to start a movement that places young voices at the center of climate action. Zero Hour believes youth are most fit to keep adults honest and accountable. Since its inception in 2017, Zero Hour has hosted a Youth Climate Summit, a lobby day in Washington D.C., an art festival and a climate march, all of which have emphasized the need for immediate, solution-based climate action.

You can learn more about Zero Hour here.

Sunrise activists believe oil, gas and other industry executives are standing in the way of meaningful action against climate change. These activists stress the importance of transforming public opinion about the climate into political power. One of Sunrise’s main goals is to help spur the adoption of the Green New Deal, what they believe to be the strongest chance the next generation has to save the environment. The movement has participated in climate strikes and government sit-ins and even organized an interstate tour in support of the Green New Deal.

You can learn more about the Sunrise Movement here.

This Summit is one of the largest annual conventions of young climate activists of color in the United States. Last year, the summit was hosted by UPROSE, a grassroots organization dedicated to climate justice and youth leadership. Youth leaders at the Climate Justice Summit recognize climate change will disproportionately affect marginalized communities, and so the Summit features these marginalized voices on the front lines of climate action.

You can learn more about the Climate Justice Youth Summit here.

There has been a problem with your Instagram Feed.