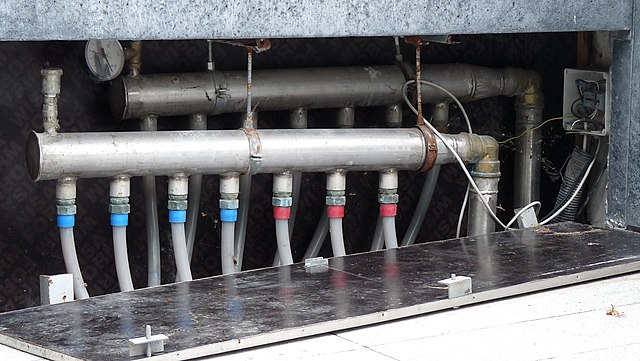 What is the GeoGrid?

The Geo Grid is a network of heating pumps that harnesses the geothermal energy stored under the Earth’s surface to heat and cool buildings. It operates through a network of pipes that go deep into the ground and connect houses to each other. These pipes are filled with water, which brings the constant underground temperature up to the Earth’s surface, and into the buildings. The pipes that connect the buildings to each other are then used to exchange energy between buildings, so one building’s need for cooling can be balanced by another’s need for heating, ensuring that no energy is wasted. A heat pump located inside each building determines whether the heating or cooling is needed. This interconnected system has already been initiated at college campuses across the country. These networks can be expanded by connecting more systems along city streets, allowing the GeoGrid to spread across neighborhoods, cities, and states. This would help replace natural gas with geothermal energy as a primary heating method, and greatly reduce carbon emissions.

Installing geothermal energy for a single household can be expensive and inaccessible for many. In order to keep costs low and expand the accessibility of GeoGrids, HEET has worked with utility companies to install geothermal technology for entire neighborhoods for the same cost of providing gas utilities. This is not only cost-efficient, but energy efficient. Positioning heat pump technology as utility infrastructure will reduce the financial burden of switching to renewable energy for consumers while preserving jobs in utility companies.

HEET, or the Home Energy Efficiency Team, is an organization working to find innovative ways to cut carbon emissions. HEET has worked on several initiatives beyond the GeoGrid Micro Districts in order to cut greenhouse gas emissions. HEET started out as a group of volunteers working together to make their homes more efficient through heat trapping doors, insulated windows, and efficient light bulbs. HEET has also supported solar panel installation challenges, resulting in discounted installation prices and greater adoption of the technology in the area.

HEET has also worked to cut methane-polluting natural gas leaks. Natural gas is the most common resource used to heat buildings, and leaks can occur in heating systems. HEET has gained data on these leaks from utility companies, and publishes annual maps showing their location and severity to draw public attention to the issue and spark action to stop them. To improve the way utility companies and governments deal with leaks, HEET also worked to pass a Massachusetts law requiring the most environmentally-impactful leaks to be addressed first. After developing a method to measure environmental impact through the Large Volume Leak Study, HEET worked with community members and the largest utility companies in Massachusetts to plan a path forward to stop the most methane-producing leaks first.

Who are Audrey Schulman and Zeyneb Magavi?

Audrey Schulman is the co-executive director of HEET, which she co-founded in 2008. She spearheaded the public mapping of utility-reported gas leaks as well as the Large Volume Leaks Study, and has worked to implement the GeoGrid Micro Districts, several of which have been installed in New York and Massachusetts. She is also the author of six novels, which have won several awards including the Philip K. Dick Award 2019, and have been translated in twelve languages.

Zeyneb Magavi is the co-executive director of HEET. Zeyneb designed the Geo Micro District to make buildings energy efficient in a scalable way. Six Geo Grid installations have been funded, mainly by gas utility companies, and she has started an independent research group to optimize the transition from gas to Geo Micro Districts. She studied physics at Brown University and global health and sustainability at Harvard, where she is now guest faculty at the School of Public Health. Zeyneb previously worked in the public health field, bringing technological solutions to public health problems in the developing world. She has also been part of two start-up launches.