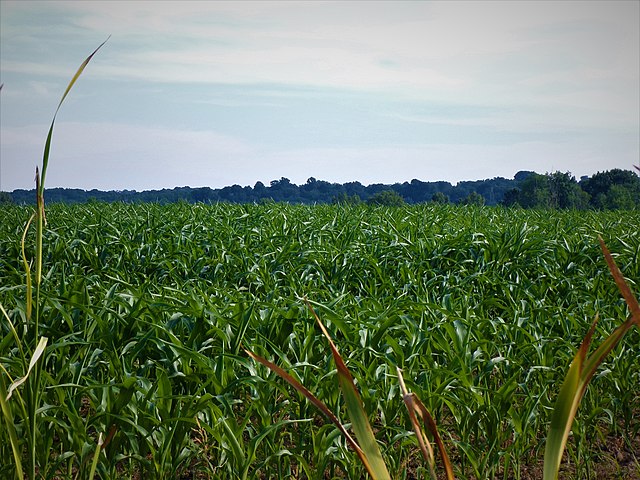 Image: A crop field in Pennsylvania. CRISPR gene editing could increase the amount of carbon dioxide that crop plants remove from the atmosphere and store in the soil.

DNA contains the fundamental information about an organism, and is used as an instruction manual to guide organism structure and function. Until CRISPR (short for Clustered Regularly Interspaced Short Palindromic Repeats) technology was developed by Jennifer Doudna and Emmanuelle Charpentier, editing DNA sequences was very difficult. Here’s the short version of the CRISPR process. First, a CRISPR enzyme is guided by an RNA strand to a DNA strand researchers want to edit. The RNA strand guides the enzyme to a specific point, and the enzyme cuts the DNA molecule. This CRISPR process can be used to eliminate DNA strands, as well as to replace DNA strands using other “repair” enzymes. It is a direct way for human beings to alter the planet’s biological blueprint, and, accordingly, its impact can be a strong force for change, positive or negative.

How can CRISPR be used to fight climate change?

CRISPR can be used to edit the genetic sequences of plants so that they capture more carbon during photosynthesis, and store it in the ground long-term. Since around a third of the Earth’s land is cropland, CRISPR-modified agriculture could potentially sequester billions of tons of carbon each year. Professor Kris Niyogi at UC Berkeley studies how CRISPR can be used to increase the efficiency of sunlight utilization in plants during photosynthesis. Photosynthesis captures carbon dioxide, and requires sunlight to do so. By not letting any sunlight go to waste, the plant can capture more carbon dioxide from the atmosphere. CRISPR can also be used to create plants with deeper roots, enabling carbon to be stored deeper in the ground. UC Berkeley Professor Peggy Lamaux studies sorghum plants, searching for the genes responsible for sorghum’s deep roots. Related genes in rice and wheat could be altered to have deeper roots, like the sorghum plant. And UC Berkeley Professor Jill Banfield studies how plant-microbe interactions can be altered by CRISPR to store more carbon in soil. Soil microbes secrete sticky biopolymers, which can take soil humic substances and lock them with minerals to create long-lasting associations (potentially up to 100 years) that hold carbon. The Banfield lab aims to CRISPR-modify plants so that they chemically “talk” to microbes, emitting chemicals that encourage the microbes to create more “sticky” carbon, rather than carbon that would be emitted into the atmosphere.

Who is Kris Niyogi?

Kris Niyogi is a Howard Hughes Medical Institute Investigator, a professor in the Department of Plant and Microbial Biology at the University of California, Berkeley, and a faculty scientist in the Molecular Biophysics and Integrated Bioimaging Division at Lawrence Berkeley National Laboratory. The Niyogi Lab studies photosynthetic energy conversion and its regulation in algae and plants. The lab’s long-term research goals are to understand how photosynthesis operates, how it is regulated, and how it might be improved to help meet the world’s needs for food and fuel. Dr. Niyogi earned his biology PhD from MIT.

In 10 years, CRISPR transformed medicine. Can it now help us deal with climate change? | University of California

This scientist thinks she has the key to curb climate change: super plants

Supercharging Plants and Soils to Remove Carbon from the Atmosphere

Can we hack DNA in plants to help fight climate change?

Ethan:  I’m Ethan Elkind and it’s time for Climate Break. Climate solutions in a hurry. Today’s proposal: can scientists start using gene editing technology on plants to get them to absorb more climate-warming carbon dioxide from the atmosphere? UC Berkeley professor Kris Niyogi described his lab’s initial research into how it could work.

Professor Niyogi: The photosynthesis done by plants is one of the major factors that removes carbon dioxide from the atmosphere on the planet. So even a small increase in the amount of photosynthesis could make a big difference.

Professor Niyogi: Most plants absorb more light than they can actually use, and so they turn on this photo protection to basically protect themselves from the plant equivalent of sunburn. We have been trying to speed up the turning on and off of  this photo protection to increase the efficiency of sunlight utilization by crop plants. and we think that we could apply that, equally to crops that might be dedicated for the purpose of removing carbon dioxide. One could move the carbon from the atmosphere and put it into soils where a lot of carbon has been lost actually due to agriculture. So this could be a, a way to basically restore carbon, to soils in a form that is stable for long periods of time.

Ethan: Now, Professor Niyogi says, the challenge is testing this technology with a wider variety of crops. But he’s hopeful for its potential to address both climate change and food production needs.

Professor Niyogi: Ideally we would be able to do this in crops that are grown for food production, and we would just boost their photosynthesis such that, we would either maintain the level of food production from the crop, or maybe even increase it while at the same time directing more of the carbon from the plant into the soil.