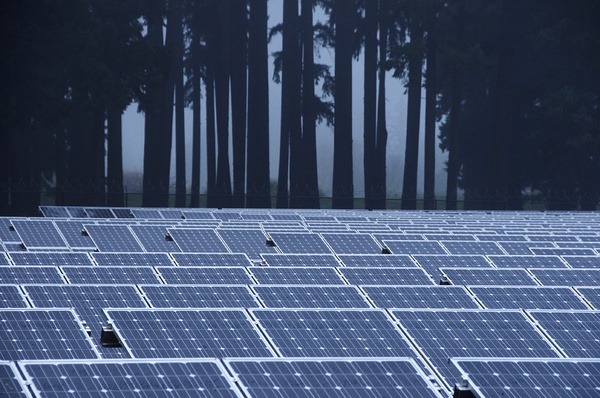 What is Large-Scale Solar?

In 1997, the Solar Energy Industries Association, or SEIA, was formed to promote, develop and distribute solar energy for the United States. By 2000, installations of solar PV surpassed 1 gigawatt. As of 2016, more than 10.6 gigawatts of large-scale solar were added to the United States’ electricity grid.

Large-scale solar, otherwise known as utility-scale solar, got its start over 20 years ago in the Mojave Desert in California and has since evolved to encompass a variety of new technologies. Large scale solar differs from rooftop solar in both the scale of the project, as well as, in who purchases the electricity generated. Large-scale solar operations usually sell electricity to large wholesale utility companies. Oftentimes these large-scale operations include some form of energy storage to ensure a consistent power supply, even when the sun is not shining. These large-scale solar installations can generate anywhere from “hundreds of kilowatts to thousands of megawatts of solar energy,” according to the Australian Renewable Energy Agency.

There are several technologies that can be utilized in large-scale solar production. Notable technologies include Photovoltaics (PV) which are able to directly convert light into electricity using a conducting material. Flat-panel photovoltaic cells are made of semiconductor materials, such as silicon placed under thin glass, which collect electromagnetic energy and converts it into an electric current. Another popular version of this type of technology is concentrated solar power (CSP), or solar thermal, which utilizes lenses and reflectors to concentrate solar heat and generate electricity. Additional notable technologies include parabolic trough solar, compact linear fresnel reflectors, parabolic dish-stirling engines, and tower systems.

Each of these technologies allows for low carbon emissions and can be implemented in a variety of ways across the globe. This diversity of technologies, availability of resources, and zero-carbon output allows large-scale solar to be an excellent strategy to reduce climate-harming emissions from other traditional forms of energy.

Senate Bill 100, officially “The 100 percent Clean Energy Act of 2018,” was a landmark policy that required renewable energy and zero-carbon resources to supply 100 percent of electric retail sales to end-use customers by 2045 in California. This bill sets a 2045 goal of powering all retail electricity sold in California with renewable or zero-carbon resources, such as solar, wind, and hydro-electricity. The bill updated California’s Renewable Portfolio Standard to make sure that it included at least 60 percent renewable energy by 2030. The bill also requires the Energy Commission, Public Utilities Commission, and Air Resources Board to use programs already available under existing legislation to achieve 100 percent clean electricity by 2021. This legislation also requires these agencies to issue joint policy reports on SB 100 by 2021 and every four years after.

The 2021 SB 100 Joint Agency Report is the first assessment of additional energy resources and resources building rates needed to ensure 100 percent clean electricity in California by 2045. Several key takeaways can be found from this initial report. First,  SB 100 will be technically achievable through a variety of methods. Second,  diversity in energy resources, including large-scale solar, will allow for lowering the overall cost of this energy. Third,  retaining some natural gas power may minimize cost and ensure power supply during this transition.

What is the Large-Scale Solar Association?

The Large-Scale Solar Association is a solar advocacy organization of owners and developers of solar that began in 2008. LSA’s mission is to support “market penetration of utility-scale solar technologies through appropriate policy mechanisms.” They work with large-scale utility companies to discuss important policy areas including transmission reform and expansion, utility procurement policies, recognition of societal and economic benefits of climate mitigation policies, and rational and environmentally sound land use.

US Large-Scale Solar on Track for a Record 2020