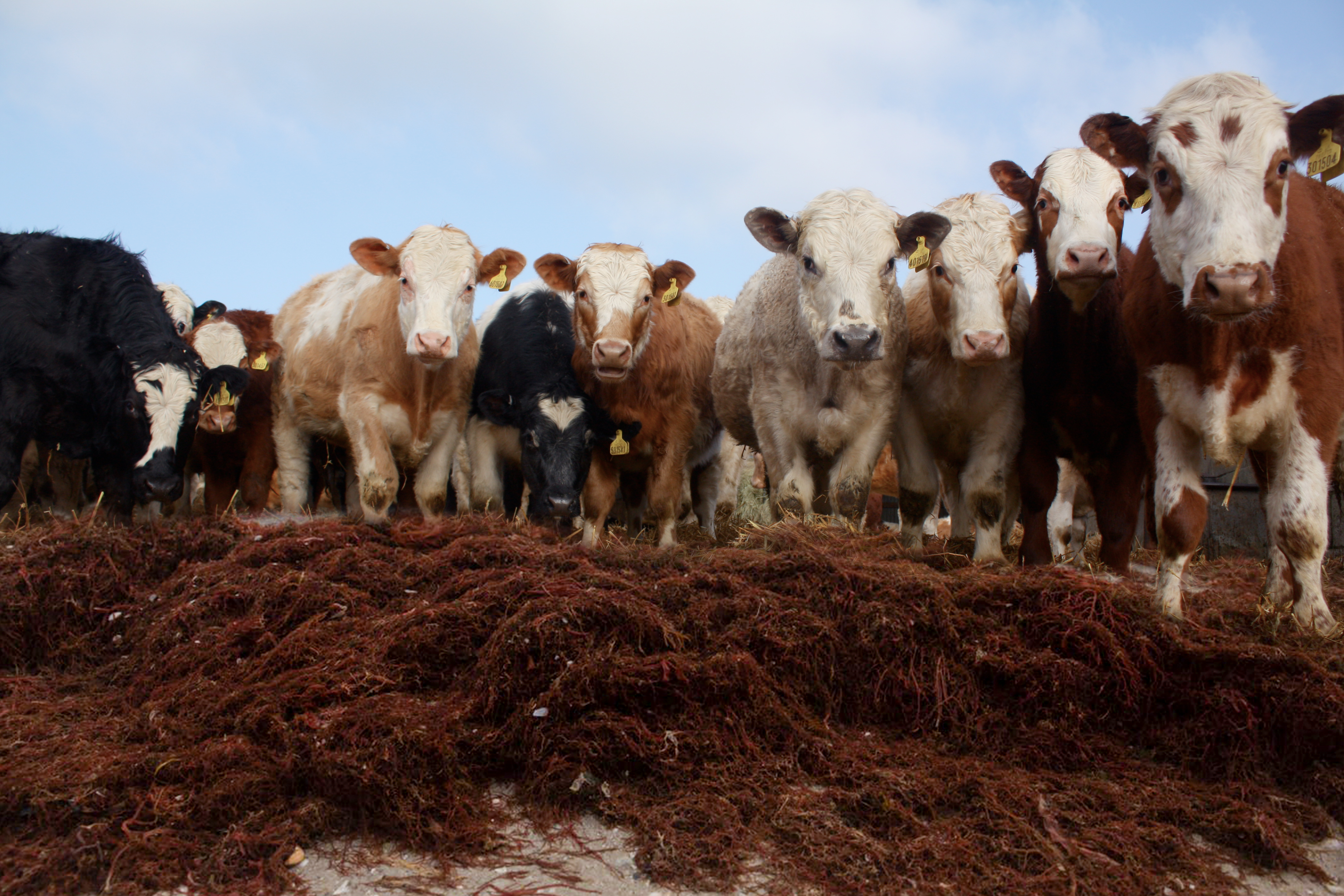 What Are Seaweed Supplements & How Do They Work?

Seaweed supplements are dietary supplements intended to be ingested by cows that contain a specific type of red seaweed designed to reduce methane (CH4) production. These supplements are thought to interact with the enzyme in the cow’s digestive tract that leads to the production of methane. This methane is otherwise released into the atmosphere by cows burping while digesting their food.

Ermias Kebreab, Breanna Roque, and the UC Davis Department of Animal Science, conducted research on adding seaweed to cow feed to reduce their methane output. UC Davis was the first in the world to test seaweed, specifically red seaweed formally known as Asparagopsis armata, on live dairy cattle. In their study, released in 2019, they found that seaweed inclusion in cattle diets reduced their methane production up to 67%. The methane emissions were reduced by up to 43% when normalized by how much cows consumed.

In their most recent research, released in 2021, they tested a similar idea in beef cattle. 21 steers were fed three diets of high, medium and low amounts of seaweed over 147 days. According to the conclusions found in the study, the research, “demonstrated that the use of A. taxiformis supplemented to beef cattle diets reduced enteric CH4 emissions for a duration of 21 weeks without any loss in efficacy.”

These studies combined have shown the effectiveness of this seaweed on methane production in cows and demonstrate how these supplements might be implemented into the diets of cattle as a potential climate solution going forward. There are also additional types of dietary supplements being tested to reduce methane production in livestock, but as of now, red seaweed appears to be the most promising.

Why Is This Important?

Methane’s impact on our environment is significant. Methane has a shorter lifetime in our atmosphere compared to carbon dioxide. However, according to the Environmental Protection Agency, “pound for pound” the impact of methane trapping heat in the atmosphere is 25 times more than that of carbon dioxide in a 100-year period.

“Over the last two centuries, methane concentrations in the atmosphere have more than doubled, largely due to human-related activities,” the EPA states. “Because methane is both a powerful greenhouse gas and short-lived compared to carbon dioxide, achieving significant reductions would have a rapid and significant effect on atmospheric warming potential.”

Critiques of This Research

While this seaweed supplement research is promising, it does not come without some doubts. Researchers at Penn State proposed some potential issues with this method of methane reduction. These researchers hypothesized that while using seaweed as a method for methane reduction in cattle is effective, it may not be entirely feasible in the long term. The researchers note that in order to effectively incorporate enough seaweed into the diets of enough cattle, scientists would have to harvest an “impossible” amount of seaweed. One possible solution to the issue of farming enough of this type of seaweed is being implemented in New Zealand. The aquaculture startup CH4 Global is funding operations to expand commercial marine and tank-based growing and cultivation of seaweed.

Additionally, the Penn state researchers noted that these seaweed supplements could lose the effectiveness of their active ingredients if stored for long periods of time. They also stated that the long-term effects of these supplements on milk and meat quality are still needing to be studied. However, in Kebreab’s 2021 research he found that “supplementing A. taxiformis had no measurable bromoform residues, no detrimental iodine residual effects in the product, and did not alter meat quality or sensory properties.”